The Fourth Sunday of Lent-March 22nd Readings are below. Please join us Sunday 10am for Morning Prayer online via ZOOM. The invitation to ZOOM is below. 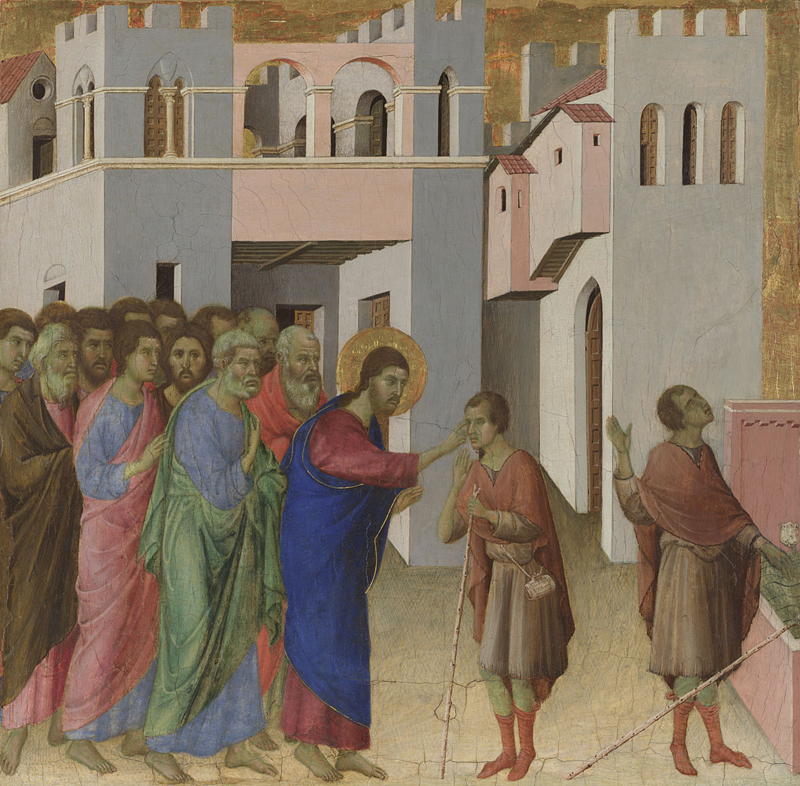 Gracious Father, whose blessed Son Jesus Christ came down from heaven to be the true bread which gives life to the world: Evermore give us this bread, that he may live in us, and we in him; who lives and reigns with you and the Holy Spirit, one God, now and for ever. Amen.

The Lord said to Samuel, “How long will you grieve over Saul? I have rejected him from being king over Israel. Fill your horn with oil and set out; I will send you to Jesse the Bethlehemite, for I have provided for myself a king among his sons.” Samuel said, “How can I go? If Saul hears of it, he will kill me.” And the Lord said, “Take a heifer with you, and say, ‘I have come to sacrifice to the Lord.’ Invite Jesse to the sacrifice, and I will show you what you shall do; and you shall anoint for me the one whom I name to you.” Samuel did what the Lord commanded, and came to Bethlehem. The elders of the city came to meet him trembling, and said, “Do you come peaceably?” He said, “Peaceably; I have come to sacrifice to the Lord; sanctify yourselves and come with me to the sacrifice.” And he sanctified Jesse and his sons and invited them to the sacrifice.

When they came, he looked on Eliab and thought, “Surely the Lord’s anointed is now before the Lord.” But the Lord said to Samuel, “Do not look on his appearance or on the height of his stature, because I have rejected him; for the Lord does not see as mortals see; they look on the outward appearance, but the Lord looks on the heart.” Then Jesse called Abinadab, and made him pass before Samuel. He said, “Neither has the Lord chosen this one.” Then Jesse made Shammah pass by. And he said, “Neither has the Lord chosen this one.” Jesse made seven of his sons pass before Samuel, and Samuel said to Jesse, “The Lord has not chosen any of these.” Samuel said to Jesse, “Are all your sons here?” And he said, “There remains yet the youngest, but he is keeping the sheep.” And Samuel said to Jesse, “Send and bring him; for we will not sit down until he comes here.” He sent and brought him in. Now he was ruddy, and had beautiful eyes, and was handsome. The Lord said, “Rise and anoint him; for this is the one.” Then Samuel took the horn of oil, and anointed him in the presence of his brothers; and the spirit of the Lord came mightily upon David from that day forward. Samuel then set out and went to Ramah.

2 He makes me lie down in green pastures *
and leads me beside still waters.

3 He revives my soul *
and guides me along right pathways for his Name’s sake.

4 Though I walk through the valley of the shadow of death,
I shall fear no evil; *
for you are with me;
your rod and your staff, they comfort me.

5 You spread a table before me in the presence of those who trouble me; *
you have anointed my head with oil,
and my cup is running over.

6 Surely your goodness and mercy shall follow me all the days of my life, *
and I will dwell in the house of the Lord for ever.

Once you were darkness, but now in the Lord you are light. Live as children of light— for the fruit of the light is found in all that is good and right and true. Try to find out what is pleasing to the Lord. Take no part in the unfruitful works of darkness, but instead expose them. For it is shameful even to mention what such people do secretly; but everything exposed by the light becomes visible, for everything that becomes visible is light. Therefore it says,

“Sleeper, awake!
Rise from the dead,

and Christ will shine on you.”

As Jesus walked along, he saw a man blind from birth. His disciples asked him, “Rabbi, who sinned, this man or his parents, that he was born blind?” Jesus answered, “Neither this man nor his parents sinned; he was born blind so that God’s works might be revealed in him. We must work the works of him who sent me while it is day; night is coming when no one can work. As long as I am in the world, I am the light of the world.” When he had said this, he spat on the ground and made mud with the saliva and spread the mud on the man’s eyes, saying to him, “Go, wash in the pool of Siloam” (which means Sent). Then he went and washed and came back able to see. The neighbors and those who had seen him before as a beggar began to ask, “Is this not the man who used to sit and beg?” Some were saying, “It is he.” Others were saying, “No, but it is someone like him.” He kept saying, “I am the man.” But they kept asking him, “Then how were your eyes opened?” He answered, “The man called Jesus made mud, spread it on my eyes, and said to me, ‘Go to Siloam and wash.’ Then I went and washed and received my sight.” They said to him, “Where is he?” He said, “I do not know.”

They brought to the Pharisees the man who had formerly been blind. Now it was a sabbath day when Jesus made the mud and opened his eyes. Then the Pharisees also began to ask him how he had received his sight. He said to them, “He put mud on my eyes. Then I washed, and now I see.” Some of the Pharisees said, “This man is not from God, for he does not observe the sabbath.” But others said, “How can a man who is a sinner perform such signs?” And they were divided. So they said again to the blind man, “What do you say about him? It was your eyes he opened.” He said, “He is a prophet.”

The Jews did not believe that he had been blind and had received his sight until they called the parents of the man who had received his sight and asked them, “Is this your son, who you say was born blind? How then does he now see?” His parents answered, “We know that this is our son, and that he was born blind; but we do not know how it is that now he sees, nor do we know who opened his eyes. Ask him; he is of age. He will speak for himself.” His parents said this because they were afraid of the Jews; for the Jews had already agreed that anyone who confessed Jesus to be the Messiah would be put out of the synagogue. Therefore his parents said, “He is of age; ask him.”

So for the second time they called the man who had been blind, and they said to him, “Give glory to God! We know that this man is a sinner.” He answered, “I do not know whether he is a sinner. One thing I do know, that though I was blind, now I see.” They said to him, “What did he do to you? How did he open your eyes?” He answered them, “I have told you already, and you would not listen. Why do you want to hear it again? Do you also want to become his disciples?” Then they reviled him, saying, “You are his disciple, but we are disciples of Moses. We know that God has spoken to Moses, but as for this man, we do not know where he comes from.” The man answered, “Here is an astonishing thing! You do not know where he comes from, and yet he opened my eyes. We know that God does not listen to sinners, but he does listen to one who worships him and obeys his will. Never since the world began has it been heard that anyone opened the eyes of a person born blind. If this man were not from God, he could do nothing.” They answered him, “You were born entirely in sins, and are you trying to teach us?” And they drove him out.

Jesus heard that they had driven him out, and when he found him, he said, “Do you believe in the Son of Man?” He answered, “And who is he, sir? Tell me, so that I may believe in him.” Jesus said to him, “You have seen him, and the one speaking with you is he.” He said, “Lord, I believe.” And he worshiped him. Jesus said, “I came into this world for judgment so that those who do not see may see, and those who do see may become blind.” Some of the Pharisees near him heard this and said to him, “Surely we are not blind, are we?” Jesus said to them, “If you were blind, you would not have sin. But now that you say, ‘We see,’ your sin remains.”

Zoom is free to download and use. No profile, membership or log-in is needed.

Dial by your location
US Toll

The Potrait above, “Jesus and the man born blind” was painted by the Italian artist Duccio circa 1315 for the Cathedral of Siena and is on display at the National Gallery in London, England.

Our Sunday office hymn is below. Please enjoy and Thanks be to God!